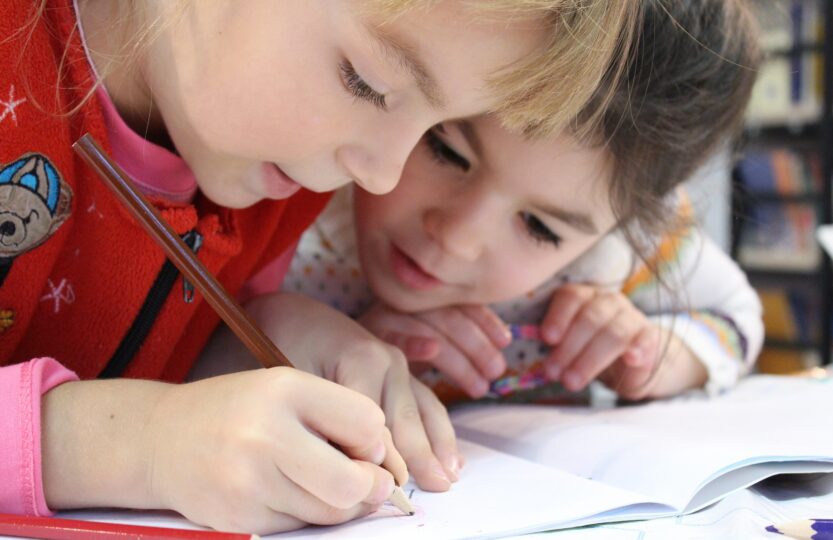 Your children starting school is one of the biggest milestones you’ll face. For me it was certainly the most emotive, my babies were really growing up. It was the start of a new chapter, the boys being more independent from us, off to make new friends and learn so many new things.  I felt like I wasn’t ready for them to start school. For families with twins, starting school means there may be some extra things to consider. Here are the top concerns I had.

To separate or not to separate?

This was the main thing that occupied my mind when we started looking at schools.  We talked to the teachers and the head teachers. We discussed between us.  My worries were that if they were in different classes that Oliver would be constantly be searching for Ethan (even if he had had some time separated from him in pre-school) and that if they were together that they would distract each other, not make as many friends with other children if they were in their twin bubble and that Oliver would continue to copy and follow Ethan.

In the end we decided to separate our boys because we wanted them to grow as individuals and to make their own group of friends. I was still worried that maybe this wasn’t the right decision but with the school we chose I had the knowledge that the boys were in classrooms separated by one door and that that door was open most of the time. I also knew that they could play together outside at playtime too if they wanted to.  As they move up the school they will only see each other at play/lunch times but I am happy with this and after two years I know it was definitely the right choice for us.

Some families may not have this choice if the school is so small that there is only one class per year. Some families with non identical twins may feel that there is no reason to separate their twins if there isn’t such a powerful leader/follower dynamic.  Other families may have the added worry that because their twins were premature, there were starting school a year earlier than they should have been.

I would recommend liaising closely with the school. Most teachers would be happy to move twins together or apart if things really weren’t working. We have always been asked if we were happy and even this year (the third year of school) they checked with us that we still wanted them to be separate.

Having twins means buying double of everything! And this means double the expense.  At the boys school we are lucky enough to have a pre-loved sale every so often when parents donate used uniform for parents to buy and the money goes to the PTA therefore funding school projects/trips/equipment etc. I made sure I went to at least two of these sales to pick up a few things.  I only things I didn’t get there were shirts, ties, coats and I wanted them to have one jumper with the school logo on it so we bought these from a uniform shop and supermarket and Matteo’s Dad helped us by paying for the boys coats from Next.  I also bought the boys shoes and PE pumps from Clarks outlet to save money.

I made sure that I started labelling uniform a couple of weeks before so I didn’t leave it all until the last minute. The first year I bought some iron on labels and stickers and I wrote their names in with a permanent marker.  I found the stickers to work the best as we could put these on the boys water bottles, bags and shoes too.

I’ve always found school mornings stressful. When the boys used to go to nursery and pre-school, they would have their breakfast there so I only needed to get them dressed and out the door with their bags. This all changed when they started school as I had to find new childcare for before/after school (see next section). They had to start having breakfast at home before going out at 7:30. I was really worried about this big change in routine, that the boys would be super tired on Monday morning and just wouldn’t eat or get ready in time.

I always make sure that I have everything in theirs bags the night before, cereal and bowls on the table ready for breakfast, sandwiches made for after school if they need them and also my lunch sorted. That way in the morning I have minimal things to do.

Before the boys started school I think my second biggest worry was about childcare before and after school. Any parent with more that one childcare place to sort must worry whether it’s going back to work after maternity leave or children starting school like this. We had to make the decision between a childminder and school club.  Each one had positives and negatives. In the end the decision was made for me as the childminder had two spaces on the exact days I needed.

You have to do what works for you and your family. Our childminder was recommended by the headmistress so talk to the school, see if they can give you contacts, meet with them at their house to see the environment the children will be in and to allow your children to get to know where they will be going.  Keep the lines of communication open and if things aren’t working for whatever reason, don’t be worried about changing things around or moving the children to somewhere else.  For the boys’ second year at school, they started going two afternoons to the childminder and one to after school club and this has worked for us, they get on well at both places.

One of my biggest difficulties in the boys’ first year was reading.  I was doing nearly all of it as my partner (for whom English isn’t his first language) was worried about saying the phonics wrong.  I found it so hard to get one to be occupied so the other could concentrate on reading with me for ten minutes. We used to have battles over it.  I felt the pressure from the teachers who on more than one occasion wrote a note in the boys’ homework diary that I should be writing down some reading every day.  I just couldn’t do it, what with work, after school activities etc.  The teachers helped and made sure that the boys were getting extra time to read in school.

Thankfully with perseverance at home, it has gotten better and my partner has been a bit more confident this last year and helped.  My advice would be to get your children used to spending one on one time reading or doing activities in preparation for learning to read.

Hopefully you will have a good bedtime routine already but getting the boys settled and in bed by 7:30pm on a “school night” meant that they had the energy to get through the next day and weren’t too shattered to do their after school activities or to concentrate on a bit of reading.  It’s not always easy to get them to calm down with the mad half hour that usually ensues after dinner but I find that especially in winter, keeping the lights low and keeping calm myself really helps.

If you follow me on Facebook or Instagram, you’ll know that this summer term just gone with the lighter nights has not been easy but we have battled through and I have tried to be consistent in my message that whether they say they are tired or not and whether it’s light or dark, it’s time to go to bed at 7:30!

I hope you enjoyed reading this post and that it was helpful in some way.  I hope your twins enjoy their time at school and settle in well.

For more information and advice visit the Twins Trust website.

Pop any questions or thoughts in the comments below. I love reading every single one x

Linking up with #TriumphantTales