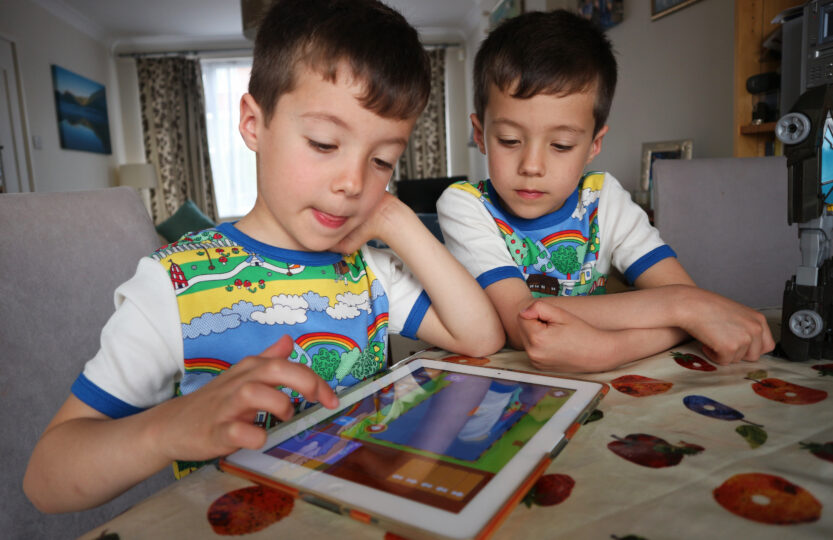 My boys love playing games and watching videos on the iPad although we limit their time on there and they probably only use it once or twice a week. When they were little we had a few educational games on there but they grew out of those so we deleted them. Now they just have a Lego game and a skiing game so when Kidlo asked us to try their coding app I was so pleased to get the boys to try something new and educational and to get them using the iPad for more than watching toy unboxing videos!

The boys are really picky about the games they play and so I was wary of what they would think but their initial reaction was great. I showed them what to do with one of the sequences games and they were away. They loved it and played for about half an hour. I actually had to peel it away from them as dinner was ready!  They used the iPad a couple of times since the first time they played and have been enthusiastic to try more levels of the coding app.

The app is aimed at children aged 5-8 years. The games available are simple sequences, sequences, loops, functions, debugging, advanced, arrays and coordinates. The boys have mostly played sequences and loops so far but have done quite a few levels and have really enjoyed it.  There are 19 different games in the sequences section, each with at least 15 levels (some up to 30) so lots to choose from and plenty to keep their engagement and enthusiasm going. I am really happy that they have enjoyed using an app that gets them to use their brain and to problem solve.

In the sequences there is a grid with a character and theme e.g “Little Firefighter”. The aim is to move the fire engine and put out the fire by selecting the correct arrows to guide it around the grid. The boys finished all 15 levels of that particular one. The photos above and below are of Ethan playing the ice-cream builder sequence game where you make an ice-cream for the monster. Another great thing about this app is that it is really colourful and the characters are likeable.

Below Ethan is playing the occupations sequence game where you have to dress the bear for work. This one really got them to use their brain, as from level one there are several items to pick up so they need to manoeuvre around the grid quite a lot and remember where they are.

In the Debugging section there are six games with manoeuvres already listed and you need to arrange them in the correct order.

In the Loops section there are nine games. This is where there are the same manoeuvres to repeat over and over.

Each section comes with a tutorial showing you clearly and simply how to play and complete the level.

Here is the official description of the app:

Kidlo Coding is a fun coding game to teach students the very basics of programming, an essential skill in today’s world. It teaches coding with 50+ fun games like firefighting, popping balloons or playing a dentist. Kidlo Coding helps students improve their problem-solving skills, boosts memory and increases logical thinking skills and prepare them for school.

There are 1000+ levels to teach these basic programming concepts:

Sequences:
Sequence is the first step and most important part of coding. Here the command is executed exactly in the same order of events given by the coder.

Loops:
Loop is a concept for repeating a set of commands.

Functions:
Functions are a set of commands which can be used anytime as per the coder’s wish or requirement.

Debugging:
Debugging is the process of finding and correcting errors in a given computer program.

Arrays:
An array is a collection of similar type of objects which is used to arrange things in a particular way.

Advanced:
Solving by a combination of the above commands.

Coordinates:
Learn the movements based on X & Y coordinates.

What skills will students learn with these coding games?
– Recognize patterns to complete all levels
– Order actions in a logical sequence
– Learn to implement patterns in their day to day life
– Easy instructions to apply in their daily lives
– Discover the right actions needed to solve each level

Overall I am really happy with this app and would definitely recommend it to other parents.  It is available to download using the links below: