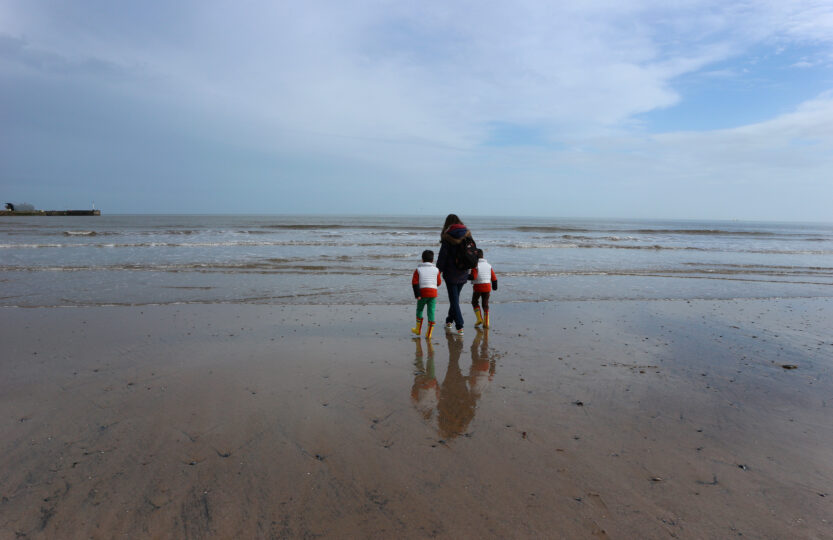 Get our family photo albums out of my Mum’s wardrobe and you’ll see plenty of photos of my brother and I as children on holiday on a British beach, digging holes, making sandcastles and burying each other, sometimes in wooly jumpers, sometimes in swimming costumes or shorts.  I remember the donkey rides, tea from a flask and the fact that packed lunch sandwiches always tasted so much nicer than if they had just been made. 24 hours by the sea – our trip to Bridlington.

I don’t think I’ll ever get Matteo to go on a proper British summer holiday but when he suggested heading to the coast for an overnight getaway I was excited to find us somewhere inexpensive and not too far away.  Living right in the centre of the UK, the coast in all directions is at least two hours away which is why we rarely go. I picked Bridlington because of its clean beaches, harbour and family entertainment.  As you can see from our video, we had a wonderful time.  The boys were so excited to sleep in a bunk bed and loved collecting stones on the beach and playing in the arcade.

We drove up in the rain on the Saturday afternoon after football practice.  It took just over two hours to get there and we found our B&B, dropped off our bags and headed straight out for a walk before dinner.  Although the rain had stopped it was pretty misty and we couldn’t really see the sea. We walked along the promenade and had a quick go in the arcade before driving to a local Italian restaurant for pizza.

The boys loved their pizza but still had room for pudding so we drove back to Bridlington and ordered dessert in a local pub.  Oliver wanted hot chocolate and a brownie but Matteo ended up eating most of the brownie as Ollie was then too full! Ethan ordered Sticky Toffee Pudding and I ordered Apple Crumble.  Very full and content we went back to the B&B where I enjoyed a hot bath after we had put the boys to bed.

They were so excited about sleeping in a bunk bed that it took them ages to go to sleep and when they woke up at about six to go to the toilet they wouldn’t go back to sleep. We should have got up and gone for an early morning walk on the beach but we decided to try and doze in bed until breakfast was ready.  As it was Mother’s Day Matteo had sneaked a present and card into his bag which the boys presented to me just before going down to breakfast.

After a good breakfast to energise us for the day ahead, we set out for the beach with buckets and spades. It was chilly enough to be wearing hats but not too cold or windy. First we walked up the North Beach which is full of beautiful white stones. Oliver loved collecting some of these plus others of different shapes and sizes.  The boys loved re-creating the scene from Karate Kid with Daddy.

After this we headed back to the car to drop of the buckets and spades and walked through town where we bought some fudge and a giant lollipop for the boys.  We explored the harbour before walking down to the South Beach.

The South Beach is so clean.  The sun actually came out and the boys enjoyed looking for shells and jumping in the waves.  It felt really relaxing to breathe in the sea air and hear the waves.  I can imagine this beach so busy on a summer’s day, children playing on the sand, donkey rides and ice creams.

After all that walking, we had finally burned off our big breakfast and headed back to the harbour for fish and chips for us and hot dogs for the boys. There was just time for a few more games in the arcade before we had to leave for home.

I hope you enjoyed reading about our trip. Would you recommend any other Yorkshire seaside towns for a short break?

Make a Mug, Make a Difference
Snapshots & Scenes from December 2017
Win a Personalised Locket from LoveLox